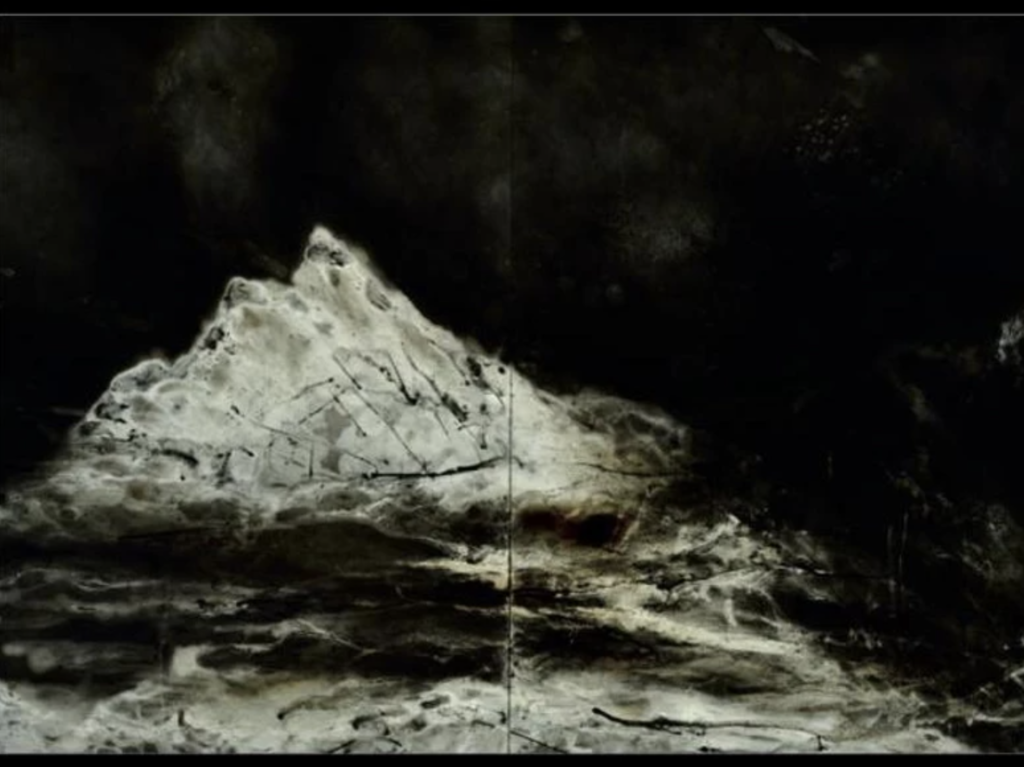 This exhibition organised by the association quatre-couleurs will bring together the works of JEAN-PAUL MARCHESCHI and the creations of the MAISON VAINCOURT.

It is from the depths of the universe, where the sky and the stars emerge, that fire, the natural and sacred element of life, surfaces. If contemporary painters sometimes forget that they have been "Homo Pictor" for 35,000 years, Jean-Paul Marcheschi reawakens this memory inscribed in the entire history of Humanity. Linking the past to the contemporary is the journey that this artist offers us with a particular technique straight out of the prehistoric caves: drawing with lampblack. Since 1984, this accomplished author, painter, sculptor and scenographer has left his brushes behind to use a torch and charcoal as his creative tools.

Soot awakens the volcanic and powerful form by crunching the black way. The work of a material from the land of fire amazes the spectator with its quasi-mystical power and transports him into a universe that is at once raw, eclectic and cultivated. Through the use and perfect mastery of wax, ash and flame, the artist's materials have replaced the classicism of painting on canvas. Jean-Paul Marcheschi dazzles us between light and shadow, abyss and abyss. He succeeds in capturing a fractal, in visually transposing the rhythm of the heart like a magician, in dazzling us with his firebird. Like the Phoenix, he rises from his ashes in the face of time, immortalizing a kind of calligraphic memory between the paths of light... In the light of his "brush of fire", he gives birth to stellar and darkly luminous works, where the sky mingles with the universe in an intense and profound darkness.

A solar tear emerges from the black, using soot, smoke or candle wax. Playing on the material, the contrasts of light, his work flies through time and space. His art is thus extracted from the elements, notably fire, mastered in prehistoric times, which is essential to life: it flows, smokes, cracks, on his paintings and engravings. Accompanied by the leather worked by Thibaut Favre de la Paillerie who shapes it in his workshop, Elisabeth Schmitt, at the bend in the rue de la Sourdière in Paris, creates an alchemy between the earthly fire of the artist Jean Paul-Marcheschi and the birth of a second life for leather goods. The artist's gesture and that of the leatherworker are extracted from the same knowledge, that of the ancestral Man. The art of painting the human body is as old as the work done by man to clothe himself.

These two craftsmen of the human gesture are both united for the occasion of a joint exhibition at the contemporary light cave that is the Vaincourt house. This house, located in the heart of the fashion capital, is a space of culture and fashion for these leather accessories that respect to the letter the heritage of the French know-how. The handbags and belts are stamped "made in France" and play on this tradition. The customer comes to this space to make an accessory according to his desires on already established bases.

This is how the work of the craftsman sublimates that of the fire artist. The Vaincourt house innovates and transmits us the passions of this painter and this craftsman who play the same artistic gesture for an exhibition. Accompanied by the know-how of the photographer and scenographer Laurent Kavir, who will create a sculpture of leather goods to decorate and sublimate the exhibition space. This snapshot taker is a genius at shaping luxury objects to bring them to life.

This double inspiration allows to create a new link between art and craft. Vaincourt offers belts to be worn like haute couture jewellery, which in turn act as a natural second skin for the wearer. This luxury player works on comfort, discretion, it is not seen but lived, it is an inner adventure, such is the French definition of luxury leatherwork. For the pleasure of both the eyes and the heart, this house plays with the notions of "desire" and "requirement".

Desire to work with a material, a calf, cow, buffalo, crocodile, snake or ostrich skin tanned by some of the most prestigious suppliers... The craftsman has an infinite range from which he draws, a grain inspires him, a colour makes him want to create. Desire also for the pleasure of wearing a beautiful accessory, unique, but essential, which marks the sense of the sophisticated person. Demanding respect for the product and also for the tradition of the gesture that has been passed down from generation to generation for thousands of years. A know-how that respects the work of the leatherworker, tirelessly repeated, which is part of the history of this craft, with the concern to always do better so that the bags and belts are cut from the most beautiful leathers. Thus, Thibaut's needle, brush, scissors, compass, thread cutter, iron and blade compete with Jean-Paul Marcheschi's flame, soot or wax. They both work with a raw material to sublimate it. The union of flame and leather, of earth and light magnifies the Vaincourt house for our greatest pleasure. The next exhibition of Jean-Paul Marcheschi will be held at the Rodin Museum in 2016.