Laurent Couson, composer and conductor, decided to try a new kind of musical experiment. On 15 original tracks, he proposed a collaboration with some of the best French DJs and electronic creators, who put on his musical compositions electronic rhythms and sounds, which make the great hours of the Techno, RNB, House and Industrial scenes of the whole world.

The result is a music with incredible energy, at the frontiers of rhythm, harmony and genres.

The album was released in September 2017 by Universal Production Music.

The project started a live tour in September 2018: a conductor, a DJ machinist, a bassist with a large symphony orchestra, accompanied by a scenography and a 3D mapping lighting, with the desire to go and meet classical orchestras, accompanied by DJs and their turntables with the desire to change the music that is usually heard in the chapels of classical music, and also to bring a new audience in their speakers.

Laurent Couson, composer and conductor, has decided to try a new type of music experience. On 15 new musical genre original titles, he invited a few of the best DJs and french electronic music creators to collaborate. These collaborators, who play their part in the world Techno, RNB, House and Industrial stages' heyday, have added to his musical compositions their rhythms and electronic sounds.

The result gives a music showing incredible energy, at the boundaries between rhythms, harmonies and genres.

The album has been released in September 2017 by Universal Production Music.

The project started a Live tour from October 2018: a conductor, a DJ, a bass player, and a scenography with a 3D mapping lighting, with the desire to meet classical orchestras along with the DJs and their turn tables willing to change the music usually heard in the chapels of classical music and also bring a new public to their premises.

Laurent Couson is a composer, pianist and conductor. At a very young age, he studied at the Conservatoire de Tours, winning first prizes. He then entered the Conservatoire Supérieur de Paris and the Ecole Normale de Paris, where he enjoyed the same success.

He began his career with Radio France, which gave him his first commissions, which he conducted himself. His works were then performed at the Salle Pleyel, Théâtre des Champs Elysées, Théâtre de la Ville, and even Carnegie Hall, New York. He became associate musical director of the Orchestre et Chœur des Trois Cultures based in Seville and Rabat for five years. He then became musical assistant to Marc Minkowski with the Musiciens du Louvre, which he also conducted in concert. In 2015, he became music director of the South Asia Symphonic Orchestra and the Bangkok Chamber Orchestra in Thailand, where he created SAM Production, a studio and production structure producing over fifty recordings and concerts.

As a composer, he has written and directed several successful musical shows in major Parisian theatres, such as "Anges et Démons", "Roméos et Juliettes" and "Monsieur Luxure", all of which have received critical acclaim. His latest creation "Electro Symphonic Project" created the event at the Bordeaux Opera.

Resolutely turned to the composition of film music, he signed the original music of about thirty feature films with Claude Lelouch, Luc Besson, Xavier Palud or Nae carenfil and many films in China, where he gave more than 50 concerts.

Laurent Couson has touched a number of trades over the 20 years of his career, alternating as a composer, writer, pianist or orchestra conductor.

His writing talents promptly met his composing skills resulting in the creation and production of several successful musicals including "Anges et Démons", "Romeos et Juliettes" or "Monsieur Luxure", all of them critically acclaimed.

Resolutely returning to film music composition, he signed the original scores for a number of feature films including movies by Claude Lelouch, Luc Besson, Xavier Palud or Nae Carenfil, as well as many productions in China, where he gave out over a hundred live performances. 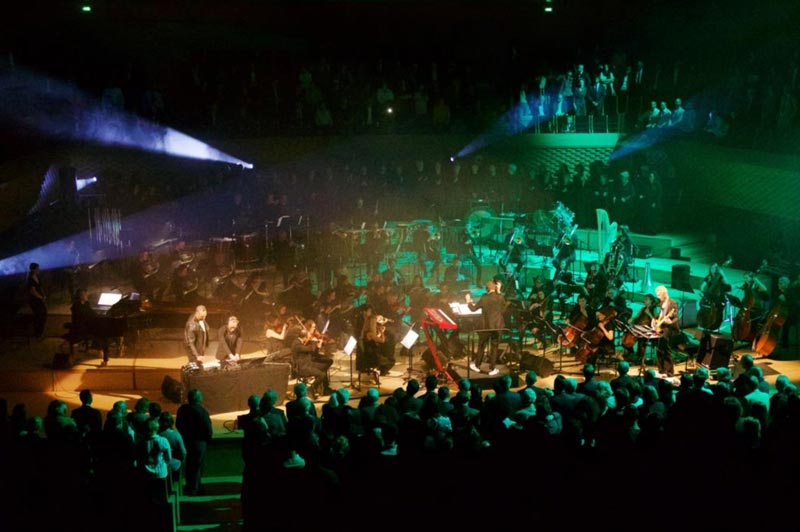 After his classes of piano and double-bass in Saint-Maur-des-Fossés and Aubervilliers-LaCourneuve conservatories, and lots of tours (McSolaar, No One is Innoncent, Yaël Naïm, Java, UHT...), Tom has worked in music production as a composer and director of many albums (McSolaar, No One is Innoncent, Tryo, Java, La Caravane Passe, Soom T, Zoufris Maracas, Lartiste, Oldelaf, Biga Ranx, Winston Mcanuff...).

In 2011, he launched his own project as "Tom Fire". Two albums have been released.

In the theatre, he was associated in 2011/2012 with the show Des Femmes by Wajdi Mouawad. For the company of director Sara Llorca, he composed the music for the shows 4.48 Psychosis (Sarah Kane, 2014) and Les Bacchantes (Euripides, 2017). In 2016, Benoît recorded his first personal album, CYCLES (Shed Music/ Absilone).

For the cinema, he composed the music for "Mon Amour", a feature film by the young director Liova Jedlicki in 2016.

His research into trance and groove led him to create the duo BAKOS with drummer Martin Wangermée at the end of 2017.

Benoît's musical career and education began in Bordeaux (Ciam, Conservatoire). Over the last ten years he has embraced many different styles of music : jazz, funk, but also rock, electronic music, french chanson and hip-hop. He appeared as a
sideman in several projects (MixCity, 0800, Estelle Meyer, Gerard Watkins, Les Indolents, Denis Colin, Pierrick Pédron...) and as a band leader in different musical groups such as BAKOS, Cycles, The Khu, Armolodium, Fada

In the theatre world, he played for the show "Des Femmes" by Wadji Mouawad. Benoit also wrote the music for plays staged by Sara Llorca (4.48 Psychose by Sarah Kane, 2014) and Les Bacchantes (Euripides, 2017).

In 2016 Benoît made his first record under his name with his band Cycles (Shed Music/Absilone).

Always seeking for new directions, his researches led him to create at the end of 2017 a duo called BAKOS with the drummer Martin Wangermée.

Charles Schillings, has developed an international DJ career with residencies in prestigious clubs around the world: Le Café d'Anvers, Lotus in New York, Queen and Rex in Paris, ...

Very close to the world of fashion and its designers, he regularly creates the soundtracks for the catwalks of the biggest fashion brands: Alexandre Vauthiier, Céline, Karl Lagerfeld, Barbara Bui, Cartier...

With an international career spanning more than 20 years, he has had residencies in famous clubs like Le Café d'Anvers (Antwerp), the Lotus (New York), the Limelight (New York), the Jet Set (Moscow), the Queen (Paris) and he is also requested to play in prestigious places such as Le Bristol (Paris), One&Only Reethi Rah, (Maldives), W (Hong Kong & Seoul), Fairmont (Dubai), ...

Close to the world of fashion designers, he has regularly sound designed fashion shows for prestigious brands such as Alexandre Vauthier, Cartier, Céline, Karl Lagerfeld, ... His talents have also been featured at special parties all around the worlds such as Calvin Klein, Louis Vuitton, Chopard, Armani, Dita von Teese, Donatella Versace, ...